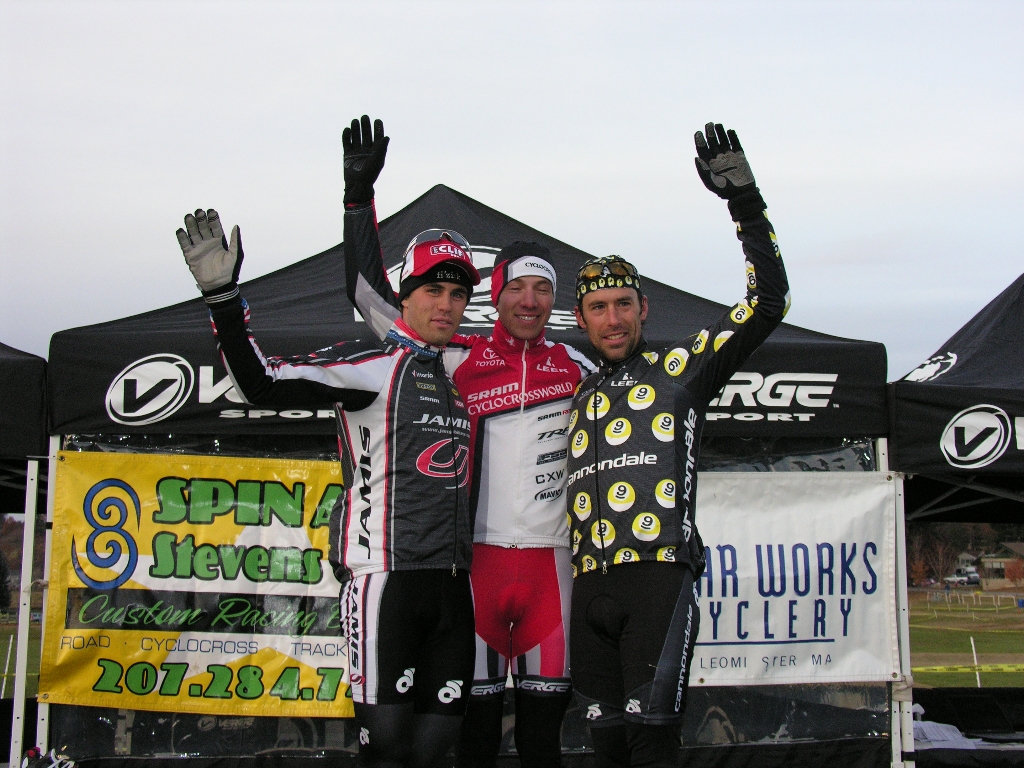 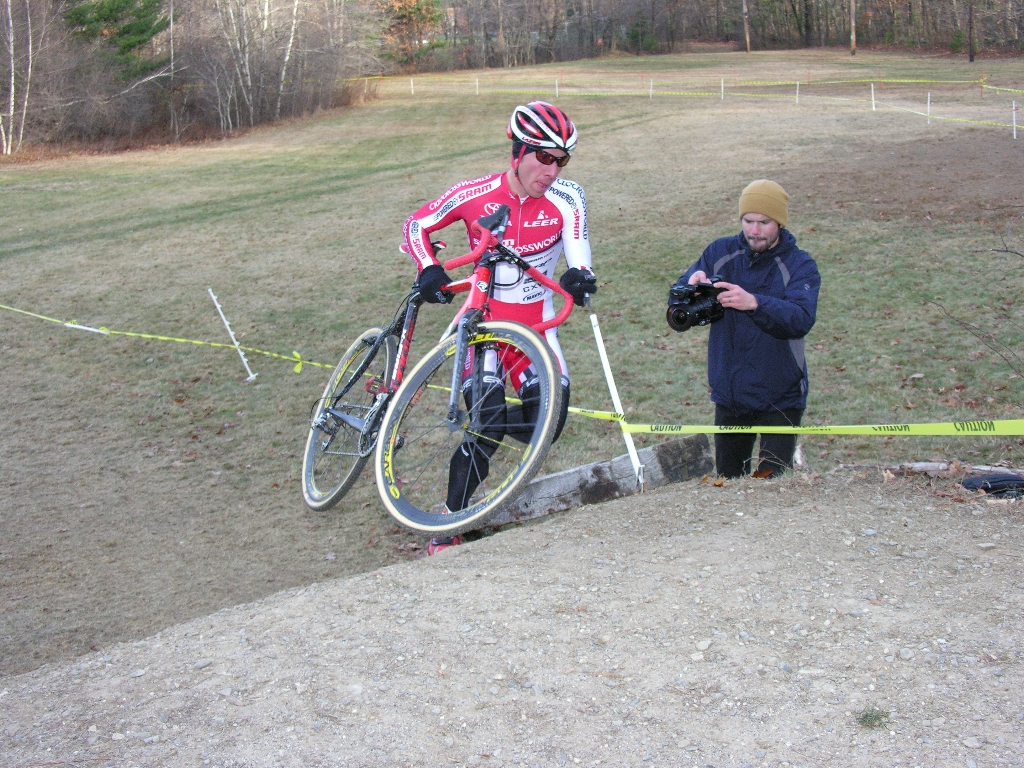 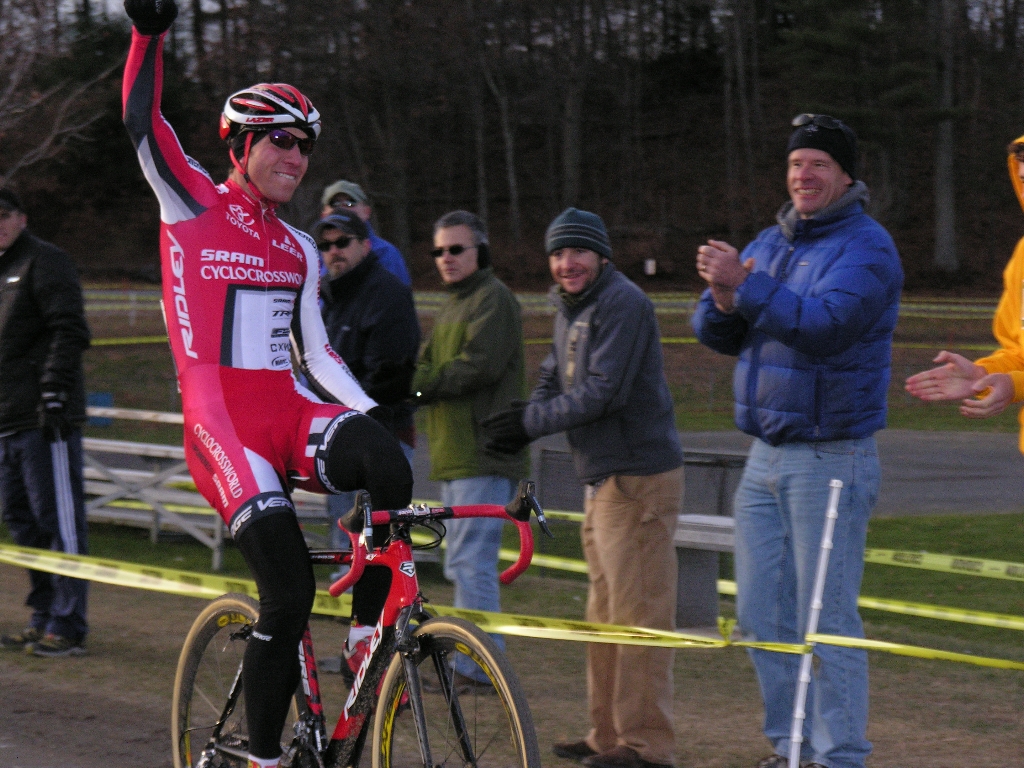 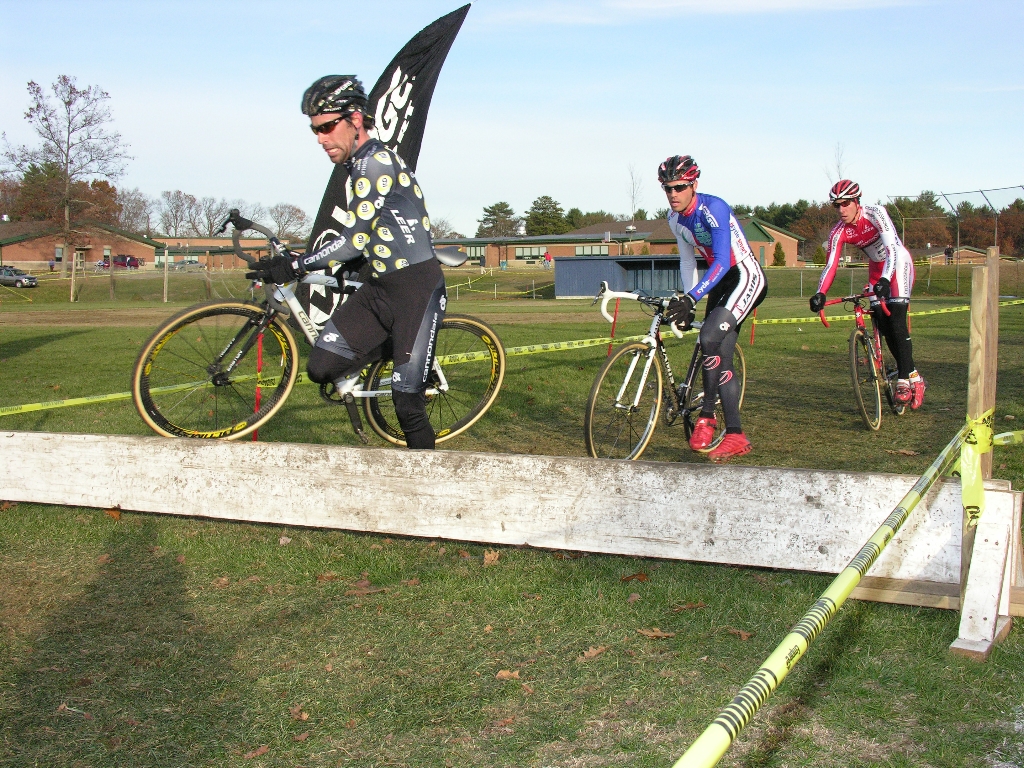 STERLING, Mass (November 24, 2007) _ Under crystal blue skies with dry but chilly weather, the Bay State Cyclocross welcomed New England cyclocrossers to the wintry weather that many have been awaiting all season.

On the first lap, a trio of Massachusetts-based riders pulled away and spent the next 55 minutes cheerfully hammering on each other, like a lovably dysfunctional family sitting down to a cyclocross feast.

From the swoopy turns - each with varying recipes of thawed to frozen grass as the late November sun got lower; to the garden-level barrier grotto, with its steep off-camber entry and exit; to the grassy, leaf covered run-up, with an eye-watering descent leading to the waist-high Horse Jump; the trio continually battered each other, seeking advantage.

The key turned out to be the run-up - and Powers's willingness to attempt to ride it, even though his success rate would have discouraged many.

On the first lap, Johnson charged into the lead and rode to within a yard of the top, then stalled and fell. Next lap, the lead trio had formed - with U23 star Jamie Driscoll (Fiordi-Fruita) close behind.

This time Powers sprinted into the run up - and fell at the top, allowing Anthony and Johnson to get a gap that took Powers spent the next lap closing.

Next lap, Powers tried again on the run-up - and made it - picking up an instant gap that Anthony and Johnson slowly pulled back. For the next 40 minutes, the three seemed to call a truce on the run-up, dismounting a conservative three or four bike lengths from the top.

In the final lap, Powers and Anthony gapped a fading Johnson. It looked like a match sprint as the two circled the running track. If Anthony could get to the run up first, he could block Powers from attempting to ride it. If Powers got a clear line, he could ride it and get a substantial gap with less than a lap to go. But his record for riding it was one-for-two and his eyes were blurry from the cold.

Anthony hammered down the track's back stretch, but Power's attacked and led into the climb. He nearly stalled with his front wheel inches from the crest, but muscled over the top while Anthony ran. By the time he dropped into the descent, he had five bike lengths, which he increased by the finish. Anthony held on to second - and his Verge series leader's jersey. Johnson rolled in third and Mark McCormack outsprinted Driscoll to take fourth.